In November 2006 following the running of the 145th Melbourne Cup, the Victoria Racing Club began work on its first major track reconstruction since 1859. To understand the enormity of the project and the reasoning behind it we have to go back in history. 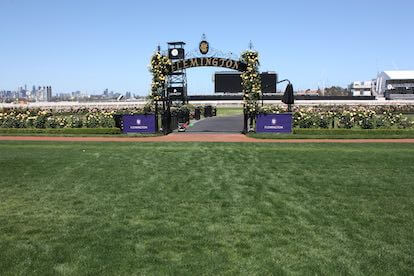 In May 1974, 350mm of rain fell on the Maribyrnong River catchment area over a fourty eight-hour period. The Maribyrnong River flows alongside the Flemington Racecourse and broke its banks inundating the entire Racecourse and forcing the evacuation of 200 Racehorses stabled there and in training. The track was also flooded in November 1887 and again in 1906 and the river has broken its banks eight times since the 1974 flood.

The Cup Carnival at the time of the 2006 redevelopment had an economic benefit in excess of $200 million and the threat of a flood jeopardizing that was a key factor of the planning for the redevelopment. A two km floodwall was part of the overall refurbishment to safeguard the Track and to ensure the Carnival would proceed without threat of a flood.

Fast-forward to 2017 and the Cup carnival had a gross economic benefit of $444.5 million to the State of Victoria and Australia. Little wonder the Floodwall was a key component in the overall redevelopment plan and the future of Flemington.

Once the 2006 Cup Carnival was over, works commenced on constructing the new track. The old track was stripped down to a depth of 500mm. A new base was created by using some of the old tracks sand along with a combination of lime and cement to provide a firm base. Drains were installed and a 100mm drainage layer added. More than 25 km of agricultural drains run across the track and these feed into a drain that has a pumped storm water system attached. The drainage system ensures racing can continue in any weather.

On top of the drainage layer, 37,500 cubic metres of sand were added to deliver a 300mm deep growing medium profile. The sand was delivered in batches and each batch was tested for drainage rate, particle size, shape and sphericity. Thirty per cent of batches were rejected and the 160mm drainage rate was achieved across all sections of the track. The VRC provided the specification for the sand with the key emphasis on drainage and stability.

Anco Turf were engaged to deliver and incorporate amendments to the sand profile as specified by Turfgrass Technology who were engaged by the VRC as their Agronomic consultants. The growing medium was consolidated and leveled prior to the addition of amendments that included composted poultry manure, Dolomite lime, Gypsum, Magnesium Sulphate, Trace elements and a NPK fertiliser. These were incorporated into the top 100mm of the profile due to the sands raw nature and the surface was again rolled prior to laying turf.

The turfing stage of the reconstruction was planned and a contract awarded to Anco to grow the turf as far back as 2002. The contract also included a four-week clause to maintain the turf after laying. The turf was grown on free draining native sand that was tested for drainage and particle size distribution at Anco’s Torquay farm prior to awarding of the contract. The paddocks were fumigated prior to planting. Kikuyu (Pennisetum clandestinum) overseeded with a blend of three Perennial ryegrasses (Lolium perenne) and Kentucky Bluegrass (Poa pratensis) were the species specification for the turf. The Oversowing timing of the Kikuyu with Ryegrass and Kentucky Bluegrass was critical to ensure the three grass species were in balance at the time of harvest.

The delay in the track construction caused by a hold up in the granting of a permit to build the floodwall meant the paddocks had to be maintained for longer than originally thought. Once the go ahead was given in August 2006, Anco ran its Field Topmaker over the paddocks to remove any thatch and vegetative material that had accumulated. This left a surface with Kikuyu stolons and rhizomes still present prior to the overseeding process with the Bluegrass and Ryegrass seed. Overseeding took place once the Kikuyu had recovered.

Monitoring for disease and nematodes was constantly conducted during the growing period.

In total 124,000 square metres of turf was laid on the track. The first stage of laying consisted of a 36,000-m2 section that was hand laid in four days with conventional 1m2 rolls of turf. The track was built in stages and once each stage was completed handed over to Anco for amendment incorporation and turf laying. The laying commenced on February 14 and was completed on March 19. Up to 10,000m2 was laid per day.

Turfing could not commence until 8.30 as trackwork on the inside tracks continued throughout the laying period and all horses had to have vacated the training track prior to commencement of laying on the newly constructed surface. Deliveries of fresh turf were between 8.30am and 3am to fit in with trackwork.

During the laying period the temperature exceeded 30degrees Celsius on several occasions. Turf was harvested late in the afternoon and evening for the morning laying sections. Morning harvests were delivered by lunchtime for the afternoon laying shift. The harvest timing minimized the turf loss ratio despite high temperatures.

Temporary irrigation was installed post laying using 50mm aluminium piping transported from the Torquay farm. Three rows of Irrigation piping were installed around the track with a total of over 10 km in lineal metreage circumnavigating the track. The temporary irrigation provided a uniform delivery of irrigation to all parts of the track even during high winds. The piping system was manual and required constant monitoring by the Anco staff.

One application of a High N fertilizer was applied to each section of track and one mow was conducted prior to handover to the VRC, which was done in stages. Following the complete handover of the track back to the VRC by Anco, Flemington’s Upton irrigator was used as the main irrigation source.

A turf nursery off the track was constructed using the same sand profile as the track and this was also turfed. Any turf plug replacements for large divots are taken from this nursery to ensure track uniformity. Since construction the uniformity of the track soil profile, drainage layer and turf composition has allowed one fertility program to be used for the entire track.

In addition to the track other works included a 180 metre tunnel to give horses trouble free access from the Stalls to the Mounting Yard, 5 Star Horse Stalls with Digital Identification of each horse and its Jockey and Trainer, and a two hectare Kikuyu Public Lawn. That lawn took the total amount of turf delivered to Flemington by Anco for the reconstruction project to 150 thousand square metres.

More recently Anco have custom grown turf for the new Mounting yard and Members lawn following the construction of a new Members Stand that will see its first Spring Carnival this year. The Mounting yard is Nullarbor Couch oversown with SL4660ST Turf Type Ryegrass. The two grasses were selected to provide a tight surface that would be capable of displaying a striped mowing pattern in the Mounting Yard and look good year round including a Melbourne winter.

The decision by the VRC to embark on such a monumental project has paid dividends with the track rated as one of the Worlds best. The 2019 Melbourne Cup will be the 12th running of the event on the new track. Happy Punting.