In 2009, the then VRC Racecourse Manager, Mick Goodie, approached Anco Turf with the idea of developing an award for young, aspiring track staff from around regional Australia. 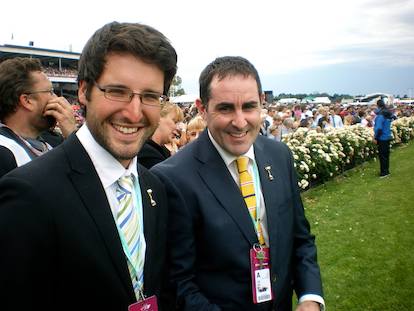 The Award was to be designed to encourage track staff in their education and aspirations to become a Track Manager.  Mick was observing a constant flow of potential good track managers leaving the industry due to a lack of opportunity and not seeing first hand what the industry had to offer at the higher end in a Racetrack Managers role.

His idea was to provide a suitable candidate the opportunity to become part of the Flemington track staff alongside himself for the duration of the VRC Spring Carnival. Shadowing Mick the award winner would be privy to track renovations, rail movements, undertake the Going Stick readings on Race mornings, attend media sessions, meet trainer and jockey needs and observe whatever else occurred over the course of Cup Week.

The award recipient would reside on course at Flemington, so as to be readily available at anytime for whatever was required in the role of Track Manager during Australia’s biggest Race Week. 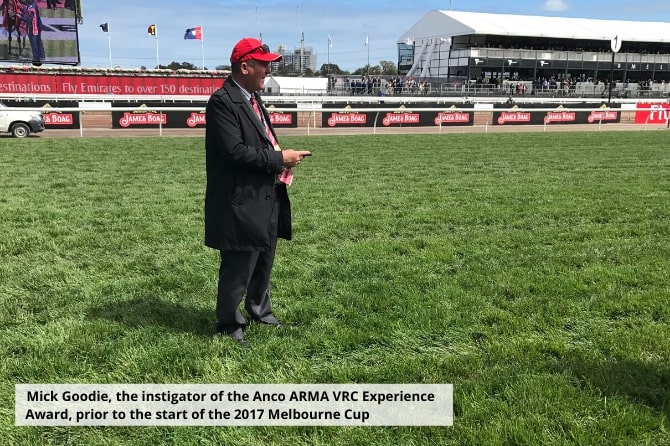 Out of the 2009 discussion the “Anco Turf Racetrack Event Award” was born and an era of hands on education for Racetrack staff began.  Anco Turf committed to sponsoring the Award, which involves flights from anywhere around Australia, transport and accommodation during the carnival as well as some other expenses. In addition Anco organise a “Turf Tour” for the award winner to various premier sports venues and racetracks such as the MCG, AAMI Park, Caulfield Racecourse and a behind the scenes Moonee Valley Friday night meeting prior to the VRC Derby meeting. A visit to the Clyde production farm of Anco is also undertaken where the awardee is taken through the turf production and harvesting process.

The first recipient of the award was Liam O’Keeffe, who was at the time the Racetrack Manager at Warrnambool. Liam had the experience of a lifetime for an aspiring Track Manager when he spent the Cup week of 2010 under the tutelage of Mick Goodie.  Looking back on his time, Liam stated, “It was unbelievable. As a country boy, coming to the big smoke for one of the largest Racing Carnivals in the world was an experience that benefitted not only myself, but also the Warrnambool Racing Club.” Michael Goodie was so impressed by Liam that in 2013 he appointed O’Keefe as his 2IC. Liam is now the Track Manager of Flemington and attributes the experience gained working with Mick as a major part of his education process and confidence to aspire to the role of a Metropolitan Track Manager. 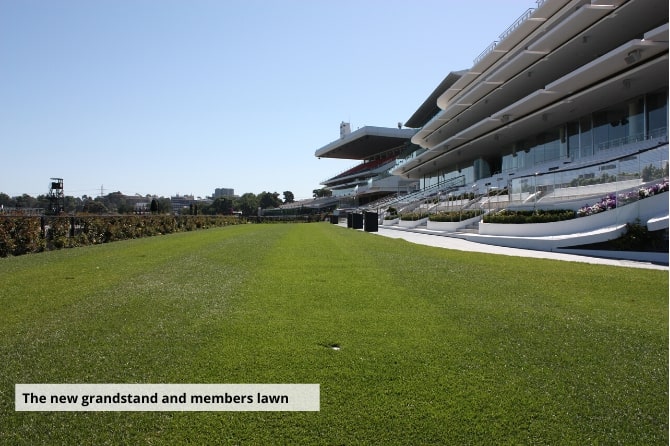 In 2013 the award winner Chris Nation was the racecourse manager at Shoalhaven City Turf Club in Nowra. In his words “the experience of spending the carnival week at Flemington was in work terms – life changing.  After spending a few years working at a country track, it re-ignited me and gave me a fresh outlook on the job.”  The week at Flemington obviously inspired Chris to see just where he could take his career and he made the trek across the Nullarbor to WA where he is now the General Manager of Racecourses and Grounds for Perth Racing.

The 2019 ARMA conference will be held in Hobart and again Anco will be sponsoring what is now called the Anco Turf – VRC Carnival Experience.

The “Experience” program has a restructured itinerary for the awardee who will arrive on Friday November 1 and fly home on Wednesday November 6 (see the itinerary below):

As a past winner, Liam O’Keefe is very keen for the “Anco – VRC Carnival Experience” to continue, and to ensure that Mick Goodie’s idea and legacy of “giving back” to the industry lives on.

The “Experience” award is still taking applications and we encourage all Racing Club General Managers and Track Mangers to nominate a young, ambitious member of their staff to apply for the “Anco Turf – VRC Carnival Experience”. Applications will be received by entering an application form that is available on the (Australian Racecourse Managers Association) ARMA website.  www.racecoursemanagers.org.au

The winning applicant will be chosen by a group comprising of Liam O’Keeffe, ARMA and Anco Turf, and will be announced at the upcoming ARMA conference in Hobart.